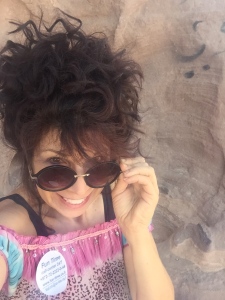 How long have you been writing?

I started writing books at the age of six.  Make that writing ON books.  On matchbooks to be exact.  Trying to convince my father to give up cigarettes.  He would open up the cover, in preparation of lighting up and there would be a little poem from his daughter saying something like:

When you fill the house with smoke,
It makes me want to cough and choke.
Put down the matches and just think smart
Will you please stop breaking your little girl’s heart?
Thank You!

Where has writing led you today?

I have one novel “out there” currently titled, “Lullabies & Alibis” – –   the story of a woman who desperately wants a daughter but keeps birthing sons.  I was interviewed about my book and featured in Elle Magazine with a lengthy article filled with misquotes and ugliness. From there a famous So Cal radio station picked up on it and trashed Me and the subject some more.  I had to hire lawyers to deal with a Slander lawsuit.   Eventually I got a phone call from 20/20 television show saying that Barbara Walters was doing a special on the same topic and would I fly to NYC to be a guest on the show?  I declined.

You turned down Barbara Walters?

You don’t have a lot of sense, do you? Ok, which

Intuitive, Original, Impatient, Impulsive, (Hey, they all start with vowels!  Let’s see if I can keep that up for the fifth) Outlandish.  Oh and Searching.

Searching is not an Adjective. And doesn’t start

Why doesn’t this Blog always stay within the

See all five Adjectives above.

Alrighty, I’m the one with the bigger font so you

should probably be a bit more respectful.

We’re one and the same person.

That would mean you are talking to yourself.

I’m actually writing to myself, not talking. There is a difference.

Will you please leave this page now? You’ve

Are you gone yet?

I’m still here.  Made ya scroll!  But here’s your reward for being tenacious and observant:

The Truth:  I hesitated sooooooo long accepting Barbara Walter’s offer that a  20/20  Producer called me to announce, “We’ve decided to take the show in a different direction.”   Translation:  You’re finished!

That’s Show Biz!  It’s just as well.  They probably would’ve torn me apart in the editing room much worse than Elle magazine did.

44 thoughts on “FAQ ABOUT THIS BLOG”