In Breaking News, the word “Selfie” has now made it into the official Scrabble Dictionary during this recent month of Aug, 2014.  And here to tell us more about the story, as well as some of the history of Selfies is our own Roving, Roaming (and Random) Reporter, Little Miss Menopause.

Thank you, News Room.  The first historical documentation of the word “Selfie” occurred in 1964 when some kid named Ralph turned around and pointed his Polaroid camera straight into his own face so he could see how bright the flash actually was.  Dressed in costume for their annual holiday family portrait, his parents framed the little overexposed, Red-Eyed Santa’s Helper, placing it on the Mantle for all to see. That night when company came for Christmas dinner, they bragged . . .

“There’s our Ralphie in a Selfie as an Elfie on the Shelfie.”

Shouldn’t these be called “Woofies?”

However, many have not anticipated the newest strict laws sweeping the nation.  The Selfie format will quickly be replacing all prior cases where professional photography was previously used and in some cases, legally mandated.  Examples of this will soon be found in your local Department of Motor Vehicles, Passport Offices, County Jails, and even Playboy Magazine.  So how might these professional photographers (who are soon to become jobless) feel about these laws? Listen to my brief interviews.

“I don’t know, Little Miss Menopause.  It’s really not gonna work.  First of all, one of the reasons men buy Playboy is because they know a male is posing these girls – – Guys instinctively know what other men wanna see.  If women take their own Selfie and that becomes the centerfold, it’s gonna be all fashion oriented with close-ups of their purses and shoes.  I don’t know any healthy red-blooded male who wants to see a pair of shoes over a pair of bongos like yours.  Know what I mean, heh heh?”

Um, Sorta.  Additionally, Mr. Handle has these suggestions to share, should the “Do It YourSelfie” laws take effect.

Bring your own high speed Fan and Favorite Cleavage Faker bra.  Look seductively into the lens, lick your lips, and choose one of the following phrases to shout flirtatiously at yourself, while wolf-whistling:

a)  Show me that sexy little pout!

b)  That’s it Baby, the camera loves you! 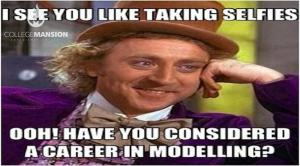 Over at the California Crowded Community Criminal County Concourse Correctional Center where they Charge Creepers with Crimes, I spoke with Melvin Mugsly who asked me to say that last sentence three times in a row, quickly.  Just kidding, he actually asked me if he could comment on what would take place if all Alleged incoming Bad Guys took their own official Mug Shots.  And he doesn’t mean pictures to be printed on Starbucks coffee cups, either.

“So you’re tellin’ me some dude who just got brung in from holding up Bank of America is gonna strut into a booth, with a mirror so they can go all pretty boy and smile nice for their Selfie Booking Picture?  I don’t think that’s right, Man.  They be all slumpin’ down in front of the height wall so they look shorter and shit.  Oh, I get what’s happenin’ now!  This here’s one of them joke shows.  Looky here.  This is Candid Camera, right?  I always wanted to be on that thing.”

Not quite Mr. Mugsly.  However he does bring up a good point.  How will these Selfie 10 Most Wanted Posters hanging on walls in the post office, appear to customers?  Gone will be that fierce, “You don’t want to run into me in a dark alley” grimace and instead, many of them might very well look like our own husbands after they mow the lawn and are demanding sex, eh ladies? (But we all know he’ll settle for a cold beer!) 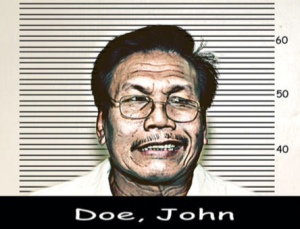 How do we know he’s really not a midget wearing high heels? Selfie Mug Shots will be very deceiving.

Next I chatted with Miss Daisy Driver (no relation to Driving Miss Daisy) at the Department of Motor Vehicles and asked her what will happen when people are allowed to snap their own photo for their official driver’s license picture?

“Well, I really don’t think it’s going to change anything at all.  People are already coming in here and writing the answers to “what should you do when you come to a four-way stop?” on their hands so they can pass the test.  Everybody has the eye chart completely memorized so they won’t have to wear glasses.  Women are constantly fudging their weight on the form.  I don’t see what difference it’s going to make if their Selfie picture actually looks half decent, instead of looking like a mutant squashed alien with limp hair and dreadful skin.”

Before I wrap up my feature story, let me just say that there’s also been talk of Selfies infiltrating into the Baby Photography industry.  Instead of professional grown-ups hiding behind expensive equipment with a black velvet cloth draped over it, exclaiming “Say Cheese!” there will be special toy cameras, perhaps a bit more sophisticated than the one pictured below.  Children will be encouraged to jingle a set of keys at themselves, while making goofy clucking sounds with their lips to coax themselves into their first real smiles.  Asian Child Photographer (and chef!)  Goo Goo Ga-Ga Gai Pan was unavailable for comment.

This has been a special featured story from your Roving, Raving (and Writhing!) Reporter, Little Miss Menopause.  And now. . . Back to you.