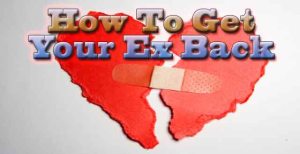 Wait a sec. . . I think my title is supposed to say, “Getting Your Ex Back (Even If THEY Don’t Want to Come Back!”) But either way, it makes as much sense!

the “Reunite With Your Ex!” industry is thriving!

Not a day goes by I don’t get an email shouting, “8 Ways To Make Your Ex Beg To Reconcile!” or “10 Phrases To Text That Will Make Your Ex Realize They Made a Huge Mistake!” or “How To Get Your Ex Back And Ignore All the Valid Reasons You Broke Up With Him in the First Place.”

And my personal favorite, “How To Lure Your Ex Back Without Looking Like a Psycho!”

Last week I sat at a cocktail table with my girlfriend Tiffany (Yes, Stephanie and Tiffany — it’s beyond precious!) at a Mix N’ Mingle event when she immediately burst into tears lamenting, “Why am I here? I just want him back. I’d give anything for that to happen.”

Immediately a man in an ugly green tuxedo shirt and suspenders materialized from behind a pillar and launched into a routine so smacking of a vacuum salesman, I anticipated him scattering clumps of dirt on our white linen tablecloth and sucking them up with his expensive sample machine.

“For just $1,000, I’ll have him crawling back before the New Year. He’ll be full of yearning, promises, engagement rings, and offering homemade Key Lime pie.” He danced a little jig as he spoke.

“Then maybe YOU want her ex back?” I winked.

He pretended I wasn’t there, and turned his attentions back to Tiffany, who btw is not the sharpest tool in the box.

“My schemes are guaranteed to have him crawling on hands and knees no matter whom he’s currently frolicking with.”

“OMG, he is??” asked Tiff, incredulously.

“I’m very sorry for your loss,” he said to Tiffany and then without missing a beat, threw a bunch of mud on our table — at which point she paid him $89.95 for a DustBuster.

“Forget that creep,” I told my friend.

“But I do still love him,” Tiffany protested.

“I meant the jerky salesman, Tiff.  Sheesh, even I have better ideas to get your guy back!”

Suddenly Tiffany had an epiphany! (But again remember — not the brightest bulb in the chandelier.)

“That’s right!  You’re creative!  You can help me. So far all I’ve come up with is losing ten pounds because he’s always hated my muffin-top. I just KNOW you’ll give me advice that will work.”

After reluctantly researching this idiotic topic, I realized there are two contradictory schools of thought. One was basically to disappear completely, because supposedly he’ll miss you terribly and come running back.

And the other is the exact opposite — recommending you definitely do NOT vanish because then he’s liable to develop complete amnesia and forget all about the amazing sex you had on the balcony during your cruise to Alaska. (What? No cruise to Alaska?? Well now we know exactly how to get him back, don’t we? Anchors away, my eskimo friend!) So essentially this technique advocates staying very much on his mind!

Alright so back to my dimwitted friend, Tiffany. I created two index cards outlining each of the very different ways to proceed. Essentially little cheat sheets for Tiff to pick one strategy and then follow it. Easy Peasy. 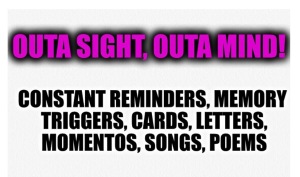 But Tiff couldn’t make up her mind which method to try . . .  so of course she utilized them both!

One day she unfriended him from all social media, cancelled every one of her memberships, and changed her phone number/email address. The next day she sprayed her signature perfume on the welcome mat of his front door, requested all radio stations play their favorite song, and had billboards put up on his route to work with pictures of her and another guy. (It was just her twin brother and they’re not identical, so this didn’t blow her ruse.)

She carried on like this for weeks, alternating days of being totally in his face with days of falling off the face of the earth — until I was sure the poor slob didn’t know whether he was coming or going — much less what Tiff was doing!

Meanwhile she also continued her Atkins diet and lost 10 lbs. However one fateful day she discovered he was on a European vacation for three months and the person she’d been seducing back was his 85 year-old grandma who was house-sitting. Not a good plan.

At this ridiculous news, I decided to permanently end my career in the field of “Reconciliation” and  just stick to writing. As a last ditch effort, I suggested that Tiff text him with an offer no man can refuse….having really great Make-Up Sex!

But Tiff claimed that he liked her face au’ naturale, without any mascara or lipstick — so I had to explain the concept.

The next day Tiffany was elated to report his response was, “Yes! But before we have great makeup sex, we need to have a really HUGE tiff.”

It was a Win/Win! Not only did Tiffany think he was referring to her name, but she was also thrilled to increase her calorie intake.

THEY SOOOO DESERVE EACH OTHER!

READERS:  HAVE YOU EVER BEEN DESPERATE TO GET AN EX BACK? WHAT DEPTHS OF DESPAIR DID YOU SINK TO? LEAVE ME A COMMENT!

10 thoughts on “Getting Your Ex Back (Even If You Don’t Want Them Back!)”