“Seriously? She got back with him after I told her what a jerk he is. Doesn’t my opinion count for anything?”

You’re holding a dress in your hand at a department store when another customer (you haven’t met before) says, “Oh. My. God. I’ve never seen an uglier frock than that!” How likely are you to buy it now? How about if it’s your best friend whose fashion sense you trust implicitly?

Now substitute the dress for your recent boyfriend. (Male readers, just use a new car and your current chick!)

This is the psychology of a relationship that gets rather tricky, doncha think? Perhaps you insist it doesn’t matter what anyone else thinks about the person you’re with because your opinion is the only one that matters. But if you suddenly become informed (or you inadvertently overhear, in the case of eavesdropping —  we don’t know ANYONE who does that, do we??) of negative feedback about your perspective mate, wouldn’t it subconsciously modify the way you feel, even if only slightly?

Disclaimer: So if you popped in for my typical lighthearted humor, you may be disappointed in today’s blog. If you decide to stay and read anyhow — let’s dig right in! Ready?

Once upon a time, I broke up with a certain ex. Many people (whose opinions I highly respected) couldn’t wait to tell me afterward that they experienced this particular ex as being totally arrogant, judgmental, and controlling. They ended by saying, “Congratulations, your split is for the best!” Now mind you, I hadn’t really noticed those traits in him, and our relationship ended for an entirely different set of reasons. Nevertheless, when a chance for reconciliation occurred (the other issues resolved) I found myself highly influenced, knowing so many friends and family found him to be such a revolting personality type — and I opted not to get back together.

Now….which is true? x) These family and friends were just attempting to make me feel better about the death of our coupleship by exaggerating their sentiments about him being so awful, so I wouldn’t mourn the loss so much?  y) That really WAS their accurate opinion of him and all those times they’d socialized with us, they were squelching it, figuring they’d spare my feelings for the sake of harmony?

The correct answer? z) I dunno. But these are the kinds of quandaries that contribute to my insomnia!

Here’s another example. Once upon a time, I was involved with a man that none of my six children cared for, and that’s putting it mildly. Was this simply because no child wants to see their mother with anyone but their father? Or should their strong reactions be taken into consideration and thought of as a red flag? For instance, it definitely crossed my mind that, “Gosh! Not just one, not just two, not just three . . .  but ALL six kids feel the exact same way about this guy! Gee, what are the odds??” (Okay some mathematician out there, please tell me!)

Then there was another (OUAT) “Once Upon a Time” tale. OUAT, I grew up in a Jewish household with a holocaust survivor father who made very clear to me from the time I was a young girl just how crucial it was I marry someone in our same faith. (Fiddler on the Roof musical, anyone?) I actually broke up with an individual of another religion (whom I was very attached to) to marry someone Jewish, solely to comply with their strong convictions. I can hear you saying . . . “And how’d that work out for ya?”

So those are some different (and true) scenarios that range in variation of intensity for how other people’s viewpoints of my relationships have impacted me. And if you think my tales are outlandish and I’m a minority in this dilemma, check out this study demonstrating that both men and women very much care about what others think of their choices right  HERE

I know what you’re thinking right about now, so don’t even bother to leave a comment. Here it is in a nutshell, right? “You’re an adult of sound mind. (Even though you call yourself “Little Miss Menopause.”) You should be living your life for you. And if you’re letting love be dictated by others, you’re sacrificing your own happiness for no reason whatsoever.” Close enough?  Or maybe you’re thinking this — “Someone who truly has your best interests at heart will love your partner, too. Why? Because you love him and because he makes you happy. Anyone who can’t fall in line to support your choice in mates is putting their own needs/desires/prejudices before what’s really important: Your Happiness.”  That sounds really astute — I’m definitely not deleting it in my final draft!

And now some subtler points to this whole mess, (after all, it’s only in a perfect world that people keep their big mouths shut!) because when someone close to you confides (for your own good, of course) what is objectionable about your potential partner (even if you decide to ignore it because it absolutely carries no weight) ——- You . . .

I’ll leave you with one last OUAT situation.  OUAT, I had a roller-coaster, turbulent relationship where we literally broke up and got back together five different times. (Makeup sex aside, this was exhausting!) But each time we separated, my “well-meaning” friends came forward to list every miserable character defect they couldn’t stand about him. Each time he and I flew back into each other’s arms, they would sheepishly backpedal and withdraw their harsh judgements. Suddenly he was Mr. Wonderful again. My takeaway from this: He was flying back into my arms simply to restore his sterling reputation in our community.

And speaking of flying, if you liked the cockeyed “reasoning” I demonstrated with that previous conclusion, you’ll love my moth logic which goes a little something like this: I pick up a moth and command it to fly. Of course it flies. I pull off one wing and tell it to fly once more. It flies. I do this two more times. The moth continues to fly. I pull the last wing off and tell the moth to fly. Alas, the moth can no longer fly. Why not???  Because when I pull off all the wings, the moth became deaf!

And now the answer to the question posed in my title. Why does a moth have anything to do with other people’s opinions of your new partner? Because if they’re not attracted to your new flame (like a moth!) — they should just keep their big moth shut!

Dear Readers: Alright so I’m not a logician, a mathematician, (or even a mothematician!) but have you ever ended (or not started?) a relationship because of what close friends and family thought? Did you regret it? 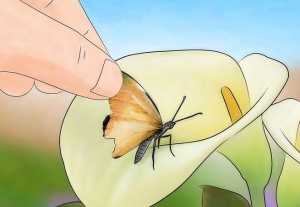 7 thoughts on “Do You Care What Others Think About Your Partner? (And What Does That Have To Do With Moths?)”