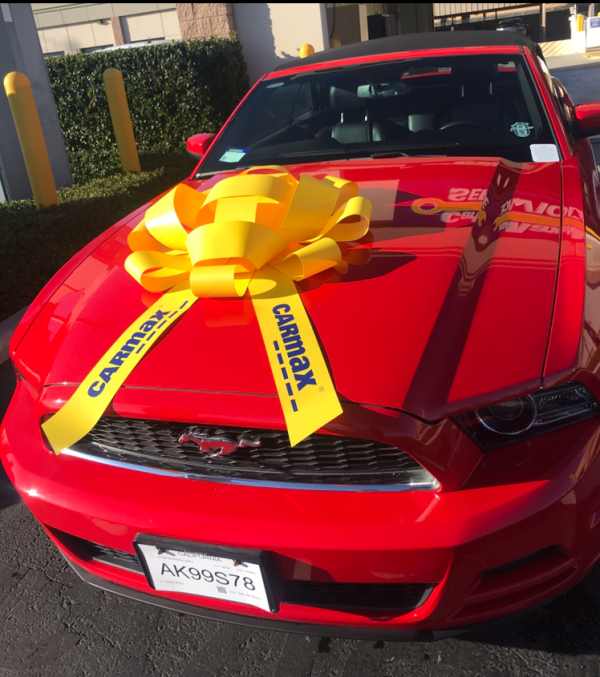 I have never been what you’d call a “Car Person.” But I am very much a “Color Person” and quite partial to red. And I’m also a “Windblown Messy Hair Person.” Once you throw in my tendency to “put the cart before the horse” — this should easily  justify why I recently walked into a used car dealership and instantly fell head-over-heels for a RED convertible Mustang.

But there’s no reasonable way to rationalize all the events that transpired from that moment on, so I just have to confess them to you…

It all began when the car salesman assured me it was perfectly fine to be  spontaneous with this kind of purchase because they now offered a “No Risk 7 day All Money Returned Buyer’s Remorse Program.”

“Bitchin’” I said in an offhand sort of way, feeling comforted that nothing was cast in concrete. I really did say “bitchin’” because you see, I became 25 years-old whenever I was near that convertible. Visions of riding along the coast with the top down, wearing Jackie O sunglasses as the wind wolf-whistles through my wildly tousled tresses (which of course would be classically contained by a brightly colored Jackie O style scarf!) flashed through my mind.

Wait! Forget Jackie. I’d be a brunette Christie Brinkley in National Lampoon’s Vacation movie! I could vividly hear that familiar soundtrack during the iconic highway scene as I winked, shook out my hair, blew kisses, and seductively stepped on the gas, leaving behind some pathetic husband and his boring family sitting in their lame minivan in my dust.

Then the dealership clinched the deal by bringing out a gigantic fluffy yellow bow and placing it on the shiny hood of the car so now it became an actual present. And everybody knows you can’t look a gift horse (Mustang, remember?) in the mouth.

As I drove off in my new used MidlifeCrisisMobile, I felt strangely carefree and serene. And I swear I would never have entertained any regrets whatsoever if that tricky salesman hadn’t planted the words “Buyer’s Remorse” into my menopausal mush mind.

By the time I pulled into my driveway, 55 Year-Old “What Have I Done?” Stephanie took over and flooded me with sensibility  and good judgment (and also an unpleasant reminder that I had recently been in a serious automotive accident and my conservative four door sedan with all its updated features had allowed me to walk away with mere scratches and bruises) and so I immediately went inside to google “Mustang Safety Test Ratings” and saw it only received 4 * out of 5 *’s. This was a horse of a different color altogether.

Wait! During my recent New Year’s Resolutions, I had vowed not to let fear and worry rule my life anymore. I would just go out to my garage and take a peek at the beautiful Mustang to reinforce my decision about keeping her. Her! Yes…. Mustang Sally was the perfect name for my new car.

“All you want to do is ride around Sally, ride, Sally, ride!” I sang jubilantly.

On day six, 55 year-old Stephanie suddenly realized that there hadn’t been any kind of extended warranty and Sally was a 2014. Granted she was low mileage, but still I should have a longer protection plan than just the 90 days the used car lot made standard. I called back the man who sold me the car and let 55 year-old Stephanie explain that I wanted to modify the contract to include the extra coverage.

“No can do,” he said firmly. “You’ll have to come in tomorrow and completely return the car and repurchase it all over again, this time specifying that you want to add that in. Fortunately this can all be done because you’re still within your seven days,” he stated.

25 year-old Stephanie began to stress that in the few minutes the car was returned  (and before it could be repurchased) someone else might rush in and buy it for themselves. The thought caused me to toss and turn all night long, but 55 year-old Stephanie prudently said, “Hold your horses…If it’s meant to be, it will be.”

And the next day I did exactly that. As I gleefully signed the new contract (and as 25-year-old Stephanie sang, “Who’s tripping down the streets of the city,
smilin’ at everybody she sees? Who’s reachin’ out to capture a moment?
Everyone knows it’s WINDY!”)– the salesman confirmed that I now officially had an additional 7 days (for buyer’s remorse) which would start anew.

25 year-old S then asked a question that some might say was throwing caution to the WIND. (Perhaps all caution should be contained inside a Jackie O type scarf?) “If I’m mega certain that I want these rockin’ wheels, can’t I just sign a waiver saying I don’t need another seven days?” Both Stephanies simultaneously held their breath, awaiting his answer.

“No can do,” said the salesman with authority. “You’re required to take another seven days starting right now. But if I don’t see you back here at the end of that timeframe, the Mustang by default, will be ALL yours!” 25 year-old S high-fived him in her cool, awesome manner. 55 year-old S started to say, “Wild horses couldn’t keep me from returning. See you in another week!” but got too panicky from the images of rolling down an embankment in a convertible and instead wondered which doctor friend might prescribe some anti-anxiety drugs.

The top went up and down at every red light as we both struggled to maintain the power. And that’s when my 55 year-old self literally got a super strong second WIND. “Birds will poop on your head. A sudden unexpected cloudburst will drench your clothes and ruin the leather interior. You’ll get skin cancer and wrinkles with all that extra sunshine. And a terrorist could toss a ticking bomb into the backseat without you even hearing it cuz it’s so noisy in here with all the wind. Come to your senses and return this car right NOW!”

“OMG. You’re so old and stodgy, you should be Gone With the WIND,” taunted clever 25 year-old S. “Convertibles are fun, and sexy, and you’re gonna have the time of your life from now on!” and then she floored it, not even believing that cops gave bright red cars more speeding tickets. Next she played extra dirty by pointing out something practical — “with this older car, the payments and car insurance will actually both go down!”

All week long the battle for power waged on. Stephanie (25) would pull the prettiest scarves out of the dressing table and attempt to tie them around my hair in the most fashionable of styles, whilst Stephanie (55) would use them like a muzzle so her younger self couldn’t sing, “WIND Beneath my Wings” by Bette Middler and “Ride Like the WIND” by Christopher Cross.

I made Pros and Cons lists, asked puzzled friends for advice, and even called the car salesman up begging, “If you were me, what would you do?” He reminded me that he worked on commission and then announced if he were me, he’d order a straight jacket.

As a last resort, I told him I now wished to add roadside assistance to my contract, hoping he’d once again say I’d have to return it and repurchase it all over, thus buying myself another seven more days to mull things over. “No can do,” he said. “My manager is onto you, Sister.”

48 hours before my seven days were up, my well-meaning boyfriend lugged over a dozen Consumer Research and Car & Driver magazines plus a life-size dummy to do a crash test with. But I chastised him, “Remember? You’re just supposed to listen and empathize with my problem. You’re not supposed to try and fix it!”

He left discreetly humming, “The answer my friend is blowing in the WIND…”

And so (at the risk of beating a dead horse) I’m asking you, my faithful readers to cast your own vote in the comments below. Is a six year old red Mustang convertible appropriate for a 55-year old quirky woman to be driving around town in? Would you leisurely stroll across the street in a crosswalk if you saw me rounding the corner, my 25 year-old self gunning the engine, “Dust in the WIND” by Kansas blasting from the stereo, as you hear someone shout, “Look! Is she going topless?!” whilst my 55 year-old self simultaneously pops valium like candy??

And in the end, I tuned in to my “Wisest All-Knowing Self” and as you can see — I most certainly did NOT get a red Mustang convertible.