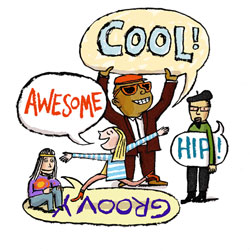 “Oh, it’s definitely a thing.”  The first time I heard that, I thought Tiffany, my flirtatious neighbor, was talking about an affair she started with our mailman. Seemed plausible – –  a while ago she confessed she had “a thing” for him ever since he delivered a large package.  Turns out casually remarking,”it’s a thing” has nothing to do with attraction or having sex.  It’s a way of reporting that something is now extremely popular – – a big fad.  In this case, she was confirming that you can order crazy sounding drinks off  a secret menu at Starbucks.     However if it’s such a secret, how can it be so widespread??

“No,”  I retorted to 45-year old Tiffany, who obviously thought she was so young and “with it,” she even changed her name from Theresa.  “You can DO your OWN thing.  Or drink Coca Cola.  It’s the REAL thing.   But nothing at Starbucks can be called a thing.”  She looked at me like I wore bell-bottoms and rode a bike with happy-face stickers on my banana seat.  (I used to!)  And lemme just say that I so rocked that look.

Would you still date me if I dated myself by riding this bike?

So I decided to let her know I could use the word “Thing” and be just as far-out as she was.  “Wild Thing….you make my heart sing….”  I crooned.  She stared in a mind-bending kinda way and then said, “Seriously?”

That’s when I knew I should probably brush up on my slang and talk  “hip” in such a way that nobody would ever think I could be referring to my grandmother’s serious injury if she were to fall down the stairs.  God forbid.

(Check it out!  Hint:  That doesn’t mean you need to head to your local library.)

1.  When sitting at a red light that finally turns green, gun your motor, roll down your window to the driver next to you and yell, “We’re good to go!”  Speaking of revving motors, when (or if!) you finally feel aroused enough by your partner – – you can also excitedly whisper, “I’m good to go.”  This is more of a turn-on than pulling out little green flag from under your pillow, waving it and shouting, “Let’s do this!”  But never say any of this  during PDF.  If you don’t know that acronym, you’re beyond my help.

2.  Ever wonder what to say in a quiet elevator?  “How are you today?  Oh fine, thank you. And you?”  Meh.  So passe! (Did you catch that cool “Meh” I just threw in there?  Make good note of that one little word  You’ll see it later on.)  But seriously, as an alternative to finding out how everyone (standing in a crowded, claustrophobic, motorized little box with no place to look but the thing that tells you what floor you’re on, even though there’s only two floors) is doing today – –  just exclaim, while pointing, “Hey! I’m good.  You’re good.  He’s good.  She’s good.  We’re good.  It’s all good.  No worries!”   Note:  Nobody says “Hi” or “Hello” anymore.  For this to come off totally radical, you must start it off by saying, “Hey!”  Also, if you can sing the preceding dialogue, sort of like the old Dr. Pepper commercial, “I’m a Pepper, She’s a Pepper, He’s a Pepper, They’re a Pepper, Cher’s a Pepper, Tony Orlando’s a Pepper” (you get the idea) then you’re one step ahead of the trend!

Would you be the most “boss” in this elevator?

3.  After you’re done conducting yourself as elaborately outlined in step #2 above, look down and just barely perceptibly, under your breath, utter the word, “Awkward!”

4.  Here’s a great way to combine two “in” words together into one sentence.   1.  Swag  and   2. Sketch   ~  This works best with artsy, interior designer types.  “Hey!  I just hung some new Swag Drapes.  Wanna come over and Sketch them?”  Have Arizona brand iced-tea ready.

5.  Remember The Twilight Zone?  (My fave episode – – the little girl who fell into her wall)  Well, nowadays you gotta work “In the Zone” into your vocabulary as much as possible.  We’re not talkin’ exploring different time zones and we’re not talkin’ football player end zones.  We’re talkin,’  “I’m totally Zoned Out, man.”  (Note:  Remember to always say, “We’re talkin'” when you’re speaking, just in case they don’t know there’s some totally sweet language coming out of your mouth.)  And now Miss Menopause is going to up your “Righteous, Rad Ratio” so you’ll always be in the Zen Zone.  Say this when someone asks you to do something you’re uncomfortable with (like reblogging this post for instance)  “Gee, I wish I could, but that’s outside of my Comfort Zone.”  Then turn around and tell the guy you just slept with last week, “Sorry Dude.  You’ve just been Friend-Zoned.”  Final Note:  Calling females “Dude” is beyond “Hip.”  Yes, my grandma is still doing fine, thank you.

6.  And now all you athletic types.  Do you bowl?  Play Bocce ball?  After you take your turn, suavely announce, “That’s just how I roll.”  If you’re not into sports, sit back, wrap up a joint of marijuana and state the same thing.

7.  Wanna really be thought of as young?  Start making even more mistakes than normal while proclaiming, “Oops….My Bad.”  You’ll be forgiven every time (without ever saying you’re sorry) – – no matter how severe your menopausal Brain Fog is.

8.  YOLO  =  You Only Live Once.   This is far too simplistic.  Whoever thought it up clearly wasn’t into creative acronyms.  Start some new lingo by shouting, YOLOBOLOPOLO  (You Only Live Once, But Offering Lovers Orgasms Pleases Old Lonely Organizers.” You’ll be especially welcomed, if you shriek this loudly in swimming pools whilst playing, “Marco Polo.”

9.  Here’s how to place your order in that chic new cafe, “I’ll have some Cool Beans smothered in Awesomesauce and make em’ Smokin!”

Okay!  There you have it.  I’m even going to give you a little guide to leaving the sickest, baddest, (that means they’ll be good!) comments.

BTW, You can comment with other things, too.  And I really hope you will.  So just Chillax! 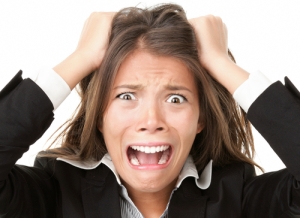 She’s not a Dudette. She’s still a Dude. But she does need a chill-pill. You’re catching on!