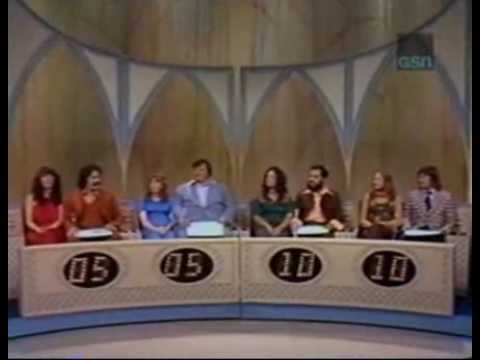 It all began innocently enough. I invited happily married friends over for a home-cooked dinner and to play my own personalized version of “The Newlywed Game.” Now I’m no gameshow host, but it was always one of my favorite television shows growing up and especially cherished were the occasions the wife would bonk the doufus husband on the head with her answer card. Would my dining room table tolerate all this excitement?  My mind began racing, thinking up fun questions.

Every couple I invited rsvp’d fast and furiously “Uh….No thanks!” Had my culinary skills reputation really spread so far and wide?

But with the first telltale phone call, it began to dawn on me that it wasn’t just bad food.

Wife #1: Hi, we’re flattered to be included on your guest list, but Manny made me call to make sure you’re NOT gonna have a question about which of my girlfriends he fantasizes about?

Me: Manny. Really? I don’t know about that question but now I’m certainly going to include one about how a guy makes it through life named “Manny?” He should have married someone named “Wifey.” Then the Justice of Peace could have said, “I now pronounce you Manny and Wifey.”

Hmmph.  As I hung up I told myself, absolutely no questions about other partner fantasies.

That night I served soup, salad, and chicken with choice of baked or mashed potatoes and already there was an issue. I asked Husband #2 (when his wife was in the bathroom) if he thought she preferred her potato whole or whipped. He glared at me and said, “I know what potato is a euphemism for! We’re not staying for your raunchy little game.” He snatched his wife’s purse (and I presume he snatched his wife’s potato as well!) and the front door slammed.

“Well,” I said resisting the urge to do an evil laugh.  “I guess we’re down to you three lucky couples.”  Everyone squirmed uncomfortably in their seats. But that might be because my dining room chairs are at the bottom of this post.

When dessert was served I invited the couples to take their seats in the pairs of chairs set aside with their backs to one another. I sliced up the pie, took my seat with my new fiancé and hoped for the best.

Answers were “his wedding band” and “this shirt I bought for him” and “Old Spice cologne.” But Wife #4 said simply, “Nuts.” When questioned, she sheepishly admitted she thought I asked, “favorite thing right now on your plate?” And she loved the pecan pie.

Me:  Moving right along. Husbands, when you first met your future mother-in-law  you thought to yourself, ‘Genetics aren’t everything. I can live with my wife if her ______ grows.’

Answers ranged from “hair” to “nose” to “ass” with one husband wanting to ensure he got a little something/something later on, because he wrote down, “heart.”

Me: Husbands again – – if your wife could be compared to a cereal, which one would she be?

Me: If your first kiss with your spouse could be described as a candy, what would it be?

Clever, clever guys.  Answers were “Starburst” and “Hot Tamales” and “Bar None.” One husband said “Pay Day” then changed it to a “100 Grand bar” and the wife thought he was inferring she was a hooker and stomped out of our house, followed by her man wailing plaintively, “But I thought that would be better than saying, Snickers or Butterfingers!”

At this point my fiancé said he was getting tired and had early morning appointments with patients and could I wrap things up fairly soon? So I decided to throw in a question about that. “If your husband was a doctor, what would he specialize in?”  Fiancé immediately sauntered out of the room yawning and to get his toothbrush. Oh well.

But then I lost another couple when I asked, “Who would you say wears the pants in the family?” I didn’t think being a cross-dresser would come up.

The last remaining husband and wife stared at me and I braced myself for the worst.

Husband #1:  We’ve waited all night to hear you ask which of her girlfriends I fantasize about being with.

These are the chairs people must sit on at my house.

29 thoughts on “Questions That Will Cause a Divorce!”

Leave a Reply to The Sinner Saint Diary Cancel reply