Not a day goes by that I don’t get an email from this most perceptive, intuitive, and thoroughly insightful guy. An online relationship expert I’ll call “The Love Bug” to protect his privacy here.

How he found me in the first place, I’ll never know — but I’ve been utterly fascinated by his email subject titles. And he apparently personally writes them all JUST FOR ME because my name is always front and center.

Have a look at some screenshots of his emails. First he tells me that I’m dreadful dating material . . . 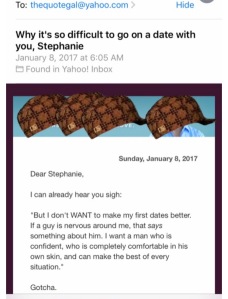 But he can hear my sighs!

Wow, he really does think I’m the problem. So I read it. And he’s 100% right. It’s an utter fiasco dating myself. I tell myself stale jokes I’ve heard 100 times before, I never like what I order in restaurants, and I toss and turn in bed — plus steal my own blankets.

I guess since I’m a “difficult date” I’ll need to settle for cyber. But it seems I’ve already got “an interesting man” writing to me. Every. Single. Day. “The Love Bug!” And yes, I certainly do know the deal. (And the drill.)

He follows it up with some fascinating questions in his subject titles. Things I’d never dared wonder about before. Like this . . .

Although I was kinda hoping those two things had been minimized after I had my breast reduction surgery.

And then something everyone should ask themselves at one time or another . . .

Gosh. We both receive rocks on Halloween night?

Then he just starts shooting out a bunch of (apparently!) necessary advice.

I quickly solved the “walking all over me” problem by buying an Oriental rug, so guys could step on that instead.

He must’ve approved of that solution because next I get this: 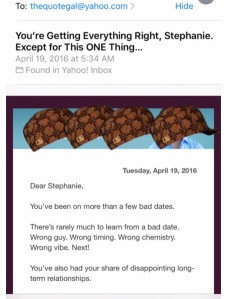 And here I thought all along that I WAS THE BAD DATE??

Next he sent a surprising revelation that was a bit hard to swallow:

Why are you even in this business then???

Not really. But now that he mentions brooms, I don’t like it when men sweep stuff under the rug. In fact I absolutely HATE that behavior. But I should have guessed Love Bug knows me better than even I know myself, because he writes back quickly — this time reiterating the 3 other things he knows I hate besides avoidant men . . .

But hey, at least he put that comma in-between “hate” and “Stephanie” (see pic above) or else I’d be getting a complex right about now.

Well now it seems he thinks there’s still a little hope for me because he sends this subject title next.

I decide this must be one POTENT email and I’ll save it for someone super special. Finally I decide upon George Clooney. I forward the above email to my handsome (unrequited) celebrity with a message asking him to merely read it (and then prepare to fall head over heels for yours truly!) but so far it’s done nothing for him. I subsequently also let my mailman get a quick peek at the email and now he’s smiling more often at me, so it wasn’t a total loss.

But apparently Love Bug thought both George and the postal worker were bad choices because I got this:

And how come I don’t have any recollection of emailing him back??  I am starting to get worried about what else I don’t remember doing!

So I write to him, (this time consciously!) making my case that my mailman was actually pretty nice and now I even get my packages carried up to my front porch!

“I don’t think so,” I write back. “He’s now taken to sorting all my junk mail and puts the coupons on top! I may just have to play ‘postman’ with him soon!” 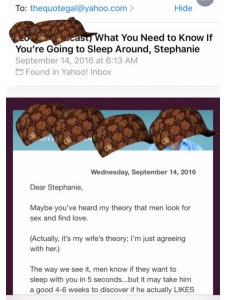 OMG!  I was only joking around! I value old-fashioned letter-carriers who wear uniforms, so sue me. But I can assure you, I am NOT a loose woman. Doesn’t he know that about me already? (Also did you notice he mentions a wife here??? Does SHE know he corresponds with me every day?? Hmmm)

Then the Love Bug does something incredible! He proves to me he’s not like every other man I meet by sending these two subjects back to back!

Wow, I am so impressed with his integrity and humility. So I write him again and say, “All is forgiven. I don’t really think the mailman is all that hot anyhow. Actually I don’t find any male all that hot.

Honestly, nobody likes a Know-it-all!

And then comes his first astonishing confession . . .

Seriously?? Well I know it was NOT with me. I would have remembered something like that. I have a friend Tiffany, who also receives this same love expert’s email advice, (so much for my personal name shining in the subject!) so perhaps he cheated with Tiffany? The hussy. Turns out she read the same message and thought it was with me he’d been philandering with.

By then The Love Bug follows this shocker up with another email saying, “just teasing” and actually he had gone all Dorothy on us! He really hadn’t committed an infidelity — he thought he had cheated but then he woke up and it was just a dream he had of being an adulterer, like the tired plot device in The Wizard of Oz. But he did describe this dream in vivid detail to his loving wife who simply said, “That’s nice, honey. Shall we have lamb or chicken tonight?” He then used this entire scenario to illustrate the ultimate trust between a man and woman.

At this point, I am thinking I’ve had just about enough of this guy’s bizarre 6th sense and his other shenanigans as well, so I casually click unsubscribe.

Alrighty then, do you see what he’s doing here?? He’s projecting how he feels about my leaving his email-subscription list onto me.

So I thought I’d make it perfectly clear who is pulling away from whom just one more time, so I send an email with UNSUBSCRIBE in the subject title.

Really, Love Bug Sir?!  You’re still doing this reverse psychology thing on me?  Let’s get things straight. I’m pulling away from YOU and YOU’RE the desperate one doing the luring!

Clearly this is a dig that he is now going to make Tiffany his main cyber gal. FINE WITH ME! So I write back and tell him I’ve had better relationship advice from a lady bug and the only reason I can justify his being “The Love Bug” is because he’s starting to really bug me and he should buzz off!

Interesting reframe. I insult him and tell him off and he calls it “sharing.” I decide ignoring him is the best plan. He continues to send me emails and finally this….

Haha! Even my six kids don’t stoop to that dumb tact when they want me to pay attention to them. I ignore some more. He tries flattery.

And it’s not even Thanksgiving! I write back that I am also grateful for the time we had together and don’t mean to nitpick, but I’m just not feeling it anymore.

I don’t see any need to defend myself for not liking mushrooms, olives, or him — so I write back saying I actually now have a solid boyfriend and am moving on to home decorating expert email lists.

He tries the “ticking clock” stunt on me.

Then he tosses out some random Kenny Roger’s poker advice.

Followed by another personal insult because obviously he knows my large bra cup size too.

Triggered, I quickly fire back that my boyfriend tells me all the time how much he adores my breasts, thank you very much.

That does it. He’s just begging for it now! I start my own email list regarding, “Advice For Online Relationship Coaches.” I harass him every night before I go to sleep with subjects like, “Hi Love Bug! Do You Know if You’ve Helped a Couple or Just Instigated a Divorce?” and “What Happens When an Email listee Contacts Your Wife and Tells Her She’s The Subject of Much of Your Relationship Advice, Love Bug?”

Finally I can’t resist and send one final email with a subject header that says, “What Do You and Lucy (From the Peanuts comic strip) Have in Common?” In the body of the email it says, “Both of your advice is worth about 5 cents!

Hi Readers – – This was a fun blog for me to write, but because the emails were legit, I blocked out any identifying information with those silly hat images. But maybe you recognize the guy’s blue collared shirt?? DISCLAIMER: Before you feel too sorry for me, you might notice the dates of his emails are all out of order. I took them out of context to add humor in this mostly fictional tale where the main point was a woman (me!) thinking someone is writing to her PERSONALLY just because her name is on it, when it’s really sent out to the masses.

18 thoughts on “This Man Knows Me Inside-Out (and he’s never even met me!)”