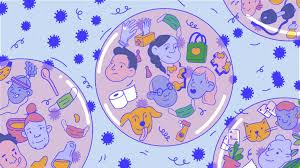 Once the global pandemic of 2020 began, the concept of “The Covid Bubble” or “The Pod” or “The Quaranteam” was a foregone conclusion — because self-isolation is not sustainable, and Zoom visits are not completely satisfying, and because it’s human nature to join a special clique so you can be stuck-up and exclude everyone else.

Essentially the premise to this entire idea is finding a select group of people who unanimously agree to forsake all others, thus deeming them “safe and healthy” so you can socialize together and not be so bored. Plus you’ll always have another wife to blame for the food poisoning your family gets from the backyard picnic because obviously she’s the one who left the mayonnaise out on the counter too long.

If you’re going to approach this idea, do so fully armed utilizing the following:

PROS OF THE JOHNSON FAMILY

CONS OF THE JOHNSON FAMILY

2.  Establish clearcut guidelines and boundaries regarding frequency and longevity. This is a temporary status. You are not becoming a commune, a cult, a reality TV show, or a kibbutz in Israel.

3.  The level of trust and commitment between families regarding staying exclusive must be elevated. There should be zero tolerance for infidelity. If a family hasn’t sowed their wild oats in their younger years by playing lots of Monopoly and Scrabble with other neighbors, you may be at risk for betrayal — you could catch them weakening and giving into temptation….straying over to the Smith’s kitchen table, and holding a seance for example.

4.   Don’t get all cutsie with this concept and start telling people you’re in a “Double Bubble with Barney Rubble” because that will just cause Trouble. Same with always using the phrase, “I hate to burst your bubble but….” However it might be a nice touch to invite your new group over for a bubble bath, letting them dry off with bubble wrap instead of towels, or offering everyone Bazooka Bubble Gum when they first join. (That’s the event planner in me who believes in creative themes and take-home party favors speaking!)

5.   Don’t forget to ask the most serious question of all: “Do you already have masks and gloves? This will lesson the expense of your joint family baseball tournament if their pitcher and ump already own such costly sports equipment!

6.   Never get hurt feelings if the family you ask to Bubble-Up with you declines. It doesn’t mean you guys have bad breath or your kids have too many temper tantrums. It usually comes down to the fact that your Cons far outweigh your Pros. As an example, the Johnson family (above) politely turned me down when I asked them to be in a Bubble with us. When I was certain they weren’t looking, I snuck a peek at their Pro/Cons and saw that under “Cons” someone had written, “The mother is a nosy snoop, she’ll scapegoat our condiments if they get food poisoning, and she makes crucial life or death decisions using a dumb Pro/Con chart. Plus she’ll probably end up blogging about us if she gets bored.