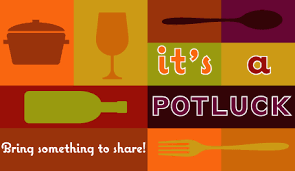 The holidays have officially descended upon us and with this time of year harkens the arrival of the Potluck Party. Whether it be held at the office, school, church, or a relative/friend’s private residence, you’ll likely encounter some variation of the following personas:

(The hosts themselves can often be categorized!)

UPDATE!  Here’s a direct link to the following!  Scroll down and please vote for team Hickson!  Right HERE!   NEWS!  I have been participating in a special collaborator phase of an exciting contest called “A Star is Born” (produced by The Neighborhood’s Kendall F. Person) when I was truly honored to be asked to team up with the one and only hilariously funny man, Ned Hickson. The voting will take place in less than 24 hours (!) Sunday, Dec. 6th at 7 pm so just click HERE to support Team Hickson in our humorous antics because updates will be posted frequently and a link to vote will magically appear at 7 pm!

33 thoughts on “12 Potluck Party Personalities! Which One Are You?”