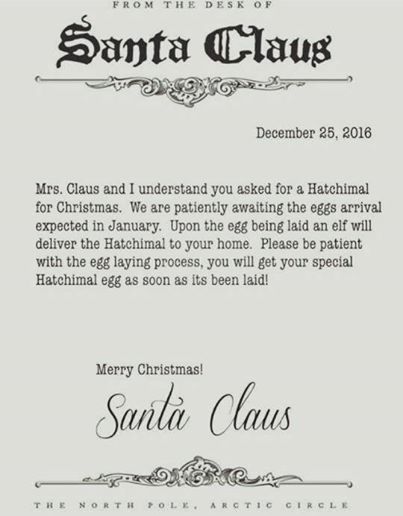 Youngsters everywhere are getting apology letters from Santa because he’s unable to get his mitts on enough of those wondrous Hatchimals. Yep, parents have gotten smart and are making Santa take full responsibility for lazy procrastinating on buying the most sought after toy this holiday season.

Template: Santa’s Apology to Jewish Children PLUS A FAVOR!

Oy vey, I’m terribly sorry you’re not getting that latest meshuganah fad hatching toy but as you know, you’re not on my gift distribution route — so when I fly by on my sled, sadly I must pass over your house. (Perhaps this is the real meaning of why you celebrate Passover?)  Please know however that it’s the thought that counts and I think about you often. I also think about your poor, exhausted parents who must come up with a new and exciting gift on each of the 8 nights of Chanukah. That’s EIGHT! Non-Jewish children are also feeling slighted they don’t get to stretch out Christmas for a week like you do. A great solution to these dilemmas would be that on just a few nights (let’s say an even six) your gifts will be things like socks, underwear, toothbrushes, and those cool refrigerator magnets the local pizza place gives out. Thank you for your understanding and maybe in your next lifetime we’ll be closer buddies.

Happy Chanukah (or however you choose to spell that)

BUT WHY STOP THERE?

Since I’ve now surpassed the age of Tinkerbell, I’m realizing in my line of work that having a good memory is important. Wait, who am I older than again? Anyhow tooth be told, I’m no longer collecting your pearly whites, but instead I’m into recycling glass and plastics so I can save up for a dream cruise to Europe. Each time you bring the bin out by the curbside every Thursday morning, I’ll leave you one of your old teeth under your pillow. When the new guy takes over my old position, you’ll be all set to start raking in the bucks again. It’s no skin off my teeth to make this offer and it’s a win/win for us both. Whadya say?

Also the Easter Bunny just texted me. The crux of the message was that Halloween infringes a lot on the whole candy concept, so he’s now gonna fill baskets with carrots instead. There’s an option for celery, but if he doesn’t hear a real strong preference, it’ll default back to those orange sticks that make your eyesight better.

Template: A Terrible Crime Has Taken Place To Someone You Depend On!

To The Family Who Is Accustomed To Everything Being Done For Them,

Recently you may have observed that the contents of your refrigerator have dwindled down to eight fuzzy strawberries, a jar of mint jelly, and a box of Arm & Hammer baking soda. You may have also noticed your clothes not getting magically folded and neatly stacked in your drawers, but instead confined to a laundry basket downstairs. And what about the empty toilet paper dispensers, you ask? And the dust piling up on the piano? Why are there no more Post-It reminders surfacing on the front door, so you don’t forget to grab your pre-packed lunch as you slam out of the house each morning?

There’s a tragic reason for all these changes. We have kidnapped “The Labor Leprechaun” and are holding her captive in the lint trap of the dryer. Let this strange bulletin also serve as a cryptic ransom note. If you want order to be restored in your home once more — beginning this evening, a homemade dinner must be cooked (complete with table set/cleared and dishes washed/dried) nightly if you ever want to see another vacuumed carpet. Do not attempt to alert the authorities at Good Housekeeping magazine, or you’ll never see your beloved Labor Leprechaun again.

Santa, The Tooth Fairy, and The Easter Bunny