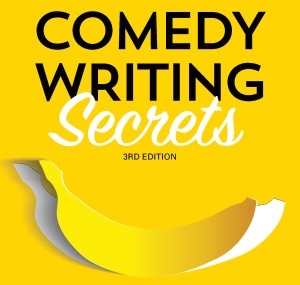 Okay maybe not quite just yet. But I’m getting closer to my big dream coming true. Over the holidays I boarded a cruise ship of which the destination doesn’t matter….because my internal GPS just wants me to end up anywhere I can proudly announce, “Okay, world, I’ve finally arrived!”  And this (to me) entails substantial amounts of fame.

And somehow this also translates to my long-term goal of writing humor material for an illustrious comedian. In fact, Jerry Seinfeld recently called me and remarked that my blog seems to be about nothing and he’s got a new idea about another show that’s still about nothing. Perhaps we could collaborate on writing? We had long discussions, brainstorming everything about nothing, but at the end of the day, nothing ever came of it. Nada.

That’s why I set my sites on the comic of this cruise ship who performed in an onboard nightclub called “The Punchliner Lounge. The first evening I sat in the front row and the comedian incorporated me into his routine about hair. There’s no need for me to elaborate on this topic if you’ve seen me, but let’s just say that if he continues with his mediocre level of jokes, he’s going to be “hair today, gone tomorrow.” And I made sure I “straightened” him out by getting some “parting” laughs with a “hairlarious” one-liner that was a “cut” above the rest.

That’s when I had him — I just knew it. Sure enough after the show, he asked me to come back to his next performance and once again to sit in the front row. I was excited to become a regular in his act because that would surely lead to writing for him. Turns out he just wanted my wild, big hair to block the view for his overbearing mother who sits in the second row and constantly tells him his jokes suck.

But that was okay because I was making “headway” into the world of Funny Guys and it wouldn’t be long before I supplied him with my humorous anecdotes for major $$!

Now I’ll take a pause here to address what most people start to wonder about me. If I love to create stand-up comedy so much, why don’t I just deliver it to audiences myself verbally. Because I’m shy. Instead of the Off-the-Wall person I portray on this blog, in real life I am soooooo ON the wall, that I’m actually a Wallflower. Now you might understand why I’ve set my sights on staying behind the scenes and writing material for famous comics instead.

The next afternoon I saw Mr. Comedian at the buffet, ladling out cauliflower soup which sloshed around in his bowl because the seas were particularly rocky. Sidling coyly up to him, I decided to use some of my seasick seductiveness along with my witty wordplay to let him know I was more than just a “hair-brained” audience seat-warmer. I efficiently spooned some soup into my own bowl, smiling about the funny line I was about to dish out.

Me: Hi there. Did you know it’s not the motion of the ocean — it’s the size of the waves?”

Mr. Comedian: Oldie. Heard that one a lot. And you’ve got it backwards, by the way.

Oops, back to my hair I suppose.

Me: (shoving a tendril of my long curly locks into his face) I mean THESE waves.

Mr. Comedian: Right. I get your explanation of your joke.

Me: (Waving my hand over and over like a beauty contest winner on a float during a parade) Look! Now I’m stuck with a permanent wave!

Mr. Comedian: Yep. You sure are.

This was a good start. We could bond together eating soup and discussing his overly-critical mother.

That night I was the first one in the audience again, this time wearing an extra short skirt and my hair swept high into a chignon. I had an idea to try out some racier material since this was an adults only show. Sex always sells.

Me: I thought because it was R-rated tonight, I’d show off my tight buns instead.

Audience: (Stares at me as I climb onto a chair and point to my fancy updo and my back side.)

Me: See my hair is in a bun and (lifting my skirt a tad higher up my thighs while blushing) You currently write material for Comedy Central, but I’ll help you write for Comedy Sensual! Not only will you become a great stand-up, but the audiences will get so turned-on, they’ll stand up too. Get it? Stand-up comedian…so the audience stands up.

Audience: Sit down! Booooooo. Down in front with that awful hair and ass!

The next morning, the Captain of the entire ship knocked on my cabin door and issued me a restraining order which proclaimed I wasn’t to get within 500 yards of the Punchliner Lounge. But because they wanted my business back on future voyages, I was also given an invitation to be a contestant in the passenger talent show, where they said I’d be welcome to freely showcase my humor.

Choosing to look on the bright side, I consoled myself that this was one step closer to my goal of becoming a famed comedy writer. As the talent show drew nearer, I began to pray that my innate shyness wouldn’t prevent me from getting my hysterical material across through the microphone.

When the master of ceremonies introduced me to the stage, he called me, “Funny Lady.” If only I could sing, I’d belt out Barbra Streisand’s, “Don’t Rain on My Parade” and just call it a night.

Once under the heavy bright lights and with all expectant eyes on me, I began to have an actual panic attack. What was I doing? I had no verbal delivery! I was just some hack writer. That’s a good joke? I could develop a hacking cough. Out of the corner of my eye, I suddenly spied a whiteboard at the end of my platform that listed the order of the contestants. Running over and spitting on it, I smudged away the names using the sleeve of my sexy dress and began to do the only thing I knew how to do……with the dry-erase marker, I penned out a joke.  The audience looked and tittered for a moment. Next I spelled out the opening paragraph of my most popular blog in all capital letters. People put their glasses on and slowly read, but eventually they chuckled some more. I erased and jotted something else down. Guffaws! Next time I’ll bring my computer keyboard connected to a big screen so I can keep the laughter coming even faster.

And now I’m calling Seinfeld back to partner up. Because he needs to know I’ve   got a new angle about comedy writing called, “Much Ado About NOTHING!”

Dear Readers: Happy 2018! It’s good to be back blogging after being away for a while. The real truth is that this particular cruise ship comedian read my Huffington Post blogs and invited me to call him when he docks in the next port! Please wish me luck on this new writing venture. Also please leave me a comment and state the name of the comedian you think is the funniest. Perhaps I can submit my WRITTEN material to them . . .  and then you’ll have to find a new favorite! 😉

9 thoughts on “Comedy Central Is Hiring Me!”