Yes, this title is an intentionally deceptive word ploy to get my blog ranked higher in the search engine optimization. This piece will not list the percentage of American women who fantasize about seducing an officer of the law. Nor will it mention dominating or submitting, unless it’s submitting writing. In fact it isn’t sexual in nature at all and the tame fantasies are actually just my own. They occur when I scrutinize my blogging statistics each day and detect a huge peak in a specific category or a tremendous amount of referred readers coming in from Facebook or LinkedIn or another source. My imagination runs amuck…

4 Common Fantasies Induced by My Stats:

Literary Representation! — I’ve been discovered! This fantasy gets spurred on when I get a lot of extra activity on my short story section or my stats with the keyword “hilarious” have uncharacteristically spiked. Particularly when I discern extra readers are all surfing in from a site called “Agent Search.” In reality, my brother is an insurance agent and has a link to my blog for his clients to get a laugh after they’ve crashed their car or had a roof leak. But since this is my personal fantasy, it goes like this: A bored fiction agent who reps well known horror authors (think Stephen King and R.L. Stine) needs a break from all the blood, guts, gore, and murders. He casually Googles, “Quirky Humor Bloggers Who Write About Gone With The Wind” and that’s it! One glance is all it takes. The rest is history. From the moment he lands on the front page of my blog he’s in stitches and it’s definitely not from a stabbing. He’s riveted by my hysterical tagline, the witty titles of my menu categories, and spends inordinate amounts of evening hours reading each blog entry to the point his wife suspects he’s having an affair. “Yes, yes, you have me hooked from your opening line!” and “Oh my god…that’s the perfect climax!” are shouted from inside his closed home office door.  The next sound you hear is my phone ringing as he rehearses what he’ll say to convince me to sign a three book contract as the next Erma Bombeck. I’ll hesitate for a moment, letting him think there’s a bidding war for my comedic talent, but eventually acquiesce when he offers royalties on lunchpails and a Barbie Doll likeness with the exact hairstyle as my Facebook Profile.

High School Quarterback Returns! — This fantasy is vividly inspired when certain categories like “Relationships” and “Love” and “The One That Got Away” zoom off the charts in my stats section.  I imagine my old high school crush has accidentally stumbled into my blog and reads my post about our yearbook. He reminisces about football games and how I endearingly clapped and screamed for him to throw a touchdown from the stands. Why didn’t he look beyond the gorgeous cheerleaders on the sidelines to see that I also had a nice pair of fluffy pom-poms? Regrets of asking the Marcia Brady lookalike to homecoming dance will plague him as he recalls 9th grade Intro to Creative Writing with Mrs. Lyndahl reading aloud my short story titled, “If Chocolate Chip Cookies Could Talk!” and how he scoffed about baked goods coming to life, causing me to sob in the girl’s locker room. He emails me (using information from my “Hire Me To Humor You” page) apologizing profusely, then asks me out as his prom date. After I vindictively tell him I have absolutely zero recollection of who he is, I am call-waited by Mattel to pose for my new barbie doll and then the envious wife of the literary agent calls, insisting on knowing how many times her husband has sent me roses?

Parent Trap!: This fantasy only occurs when certain posts I’ve written about my childhood are repeatedly perused in my stats. Even though I only have one brother, suddenly a familiar looking girl leaves a comment on my blog insinuating we are related and in fact she believes we share the exact same genetics! Apparently she was put up for adoption to a poor family because after I was born, our parents realized that daughters were just hormonal nightmares who cost lots of $$ with orthodontists, gynecologists, and dermatologists and so they could only afford to raise just one. We proceed to make plans to attend the same summer camp and then discreetly switch homes afterwards.

Law Suit!: (I never claimed my fantasies were always fun or exciting.) This terrifying scenario comes on after I notice that my stats are soaring for a certain popular picture I used long ago to illustrate a past blog post.  Why would so many people be looking at this particular picture all at the same time?? Suddenly fear strikes deep in my heart as I realize I inadvertently forgot (okay I was lazy!) to acknowledge copyright info or give credit to the photographer. And now somehow she’s entered her photo into Google Search Images and it came up that my blog is featuring HER masterpiece without any attribution. That grave injustice (combined with the fact that I am the one who grew up with parents who cared that I had an overbite, acne medication, and regular pap smears) fuels my long-lost sister to take me to court. An example is made out of me for all the bloggers who blatantly steal copyrighted images and I’m prosecuted to the fullest extent of the law. Even smiling coyly while trying to seduce the arresting police officer doesn’t prevent me from getting taken to jail. (In fact he tightens the handcuffs.) I only get one phone call and it’s to my literary agent to bail me out with a hefty book advance, but the call is intercepted by his insanely jealous wife who refuses to let me speak to him and instead forwards me to my old crush, the high school quarterback — and of course now he doesn’t remember me from Adam. Except since this is still MY fantasy, his youngest daughter begs for a popular lunch box and every day that his ugly, old, former cheerleader wife makes peanut butter and jelly sandwiches, he fantasizes about making love to the female author whose likeness is now prominently celebrated on his daughter’s brand new trademarked lunchpail. 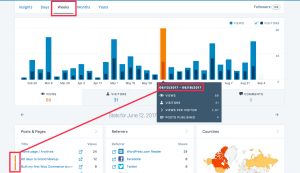 Readers: What nutty fantasies has your Stats Section inspired? 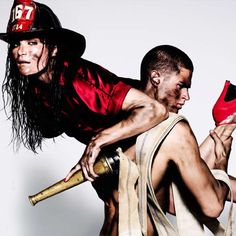 “A French Maid? That’s the dumbest thing I’ve ever heard. And clean your own damn apartment with that fru-fru feather thingy!” I said, slamming the door. That was my response to my college boyfriend’s suggestion on how we should spice-up our sex life.

Why did he need me to pretend to be someone else? How insulting! Truth be known, if you were shy like me, fantasy role-playing felt super awkward. Fast forward to a time I got involved in community theater and suddenly I saw “risqué make-believe” in a whole new light. The stage-light, that is. Oscar winning performance, here I come!

The following are highlights from some of the meatier roles I’ve sunk my teeth into over the years. (Note: I mostly had the same male co-star.)

Lonely Housewife and Repairman (okay, nothing was actually broken and The Maytag Man seemed too predictable, so I suggested he be a chimney sweep instead.) As he surveyed my filthy fireplace with his poised broom, I sashayed in wearing a negligee, holding graham crackers and a wire coat hanger with a white cottonball on the end (my marshmallow-roasting prop). “Would you like S’more?” I asked, fluttering my false eyelashes. He stammered, “Some more? I haven’t even had any,” then abruptly lunged for my breasts. “Cut!!” I yelled. “Just a minute, Buster. You forgot to say ‘Yet.’ Your line should be, I haven’t had any YET.” I angrily tossed a handful of black soot into his surprised face while humming, “Chim Chim Cher-Ee” from Mary Poppins and exited stage left.

Hitchhiker On The Road: (The street we chose was very realistic, although I got a lot of gawking from other motorists (I should probably mention that unbeknownst to boyfriend, I had decided to roleplay a Hooker-Hitchhiker.) I giggled when I saw the limousine slow down, wishing I were a fly on the wall when my guy directed the unsuspecting chauffeur to pull over. “What’s your name?” my boyfriend’s eyes widened with surprise at my black lace stockings, as he asked the question we’d rehearsed. “What do you want it to be?” I breathed huskily, sliding in next to him in the backseat. “I appreciate this whole seduction thing you got going on here, but let me give you a tip. I’m a sure thing,” I loudly continued. The limo-driver stared at me in the rear-view mirror. For extra measure I added, “In case I forget to tell you later, I had a really good time tonight.” Driver’s jaw dropped, finally recognizing I’ve been quoting Julia Roberts from Pretty Woman. But slow Boyfriend still clueless so at the red light I directed my next line toward the front seat. “I was in here yesterday. You wouldn’t wait on me. You people work on commission, right?” Driver nodded. “Mistake. Big mistake. Huge mistake. I have to go shopping now!” I flounced out of the vehicle, leaving both men staring after me flabbergasted.

Innocent School Girl: Aha! Same boyfriend (as above) thought he could outsmart me into having sex, this time turning the tables with a role-play reversal that put him in charge as the teacher. But when he leered at me I let out a piercing scream, kicked him in the groin with my little white patent-leather Mary Janes, and proceeded to report him to Child Protective Services (and the PTA) using my cellphone.

Sexy Nurse in All White: While I fastened my satin garter belts, my  very male “patient” sauntered in and started inadvertently sneezing, which wasn’t in our script. Pulling out a thermometer, I lectured, “Sorry, but I’m in my best friend’s wedding this weekend and can’t risk getting sick. I’m not touching any part of you until you get a flu shot, buddy. Understand?”

Porn Star: He finally got wise, appointing himself Executive Producer in this next roleplay so he could unleash my wannabe acting skills on a real “casting couch.” At my audition, he gave me a lengthy screen test, had me pose for racy photos, then directed me to read my lines extra seductively. But just as I was actually getting turned on, contemplating if my Adult Film Star name should be “Anita Diamond” or “Candy Barr,” he hollered, “Quiet on the set!” That was my cue to inquire if I had gotten the part?  “Don’t call us. We’ll call you,” he responded. Next thing I knew, a gorgeous, busty blonde bombshell strolled in, just as a giant metal hook yanked me offstage. Obviously my boyfriend had enough of my role-playing shenanigans and called in my understudy. Hmmmph. Lights, Camera, but no action.

Are you ready for your close-up? Do you think role-playing is sexy or just silly?