Sometimes a mere word can conjure up an image so intense that people become highly distraught. ‘Panties’ is one of those words. The Atlantic magazine is just one of several publications that ran an article going into depth about the controversy that’s ensued over the use of this term. And I’ve actually just spent an hour reading more research on the topic of ‘Panties’ than I think there might be out there for the subject of ‘Insomnia.’ But it didn’t help me fall asleep.

First of all, nevermind that people have such an incredible curiosity about this noun that they actually go onto the Yahoo Answers website (numerous times!) posing the question “Is ‘panties’ singular or plural?” but many psychologists and researchers are actually also making the leap that calling women’s’ underwear ‘panties’ has a direct link to the amount of pedophiles in our country.

But most of the research I came across was official surveys being administered to find out if the population now really detests the use of this word or maybe they’re just lukewarm about it?  Is that a job that someone can seriously be hired to do?  “Yes, I’m here to fill out an application to be a Word Wonderer. Aside from ‘panties,’ I wonder how the public perceives the word ‘spatula?’ And I’d like to put to rest once and for all where we all stand on ‘balderdash’ and ‘flummoxed’ as well. Thank you, and yes minimum wage is acceptable because this is my passion.”

Personally, I used to date a man who told me he thought ‘panty’ was the sexiest word in our language. I just think he was in a college fraternity that conducted one too many panty raids. But interestingly, he couldn’t stand to hear the word combined with ‘hose.’  In fact, if I so much as uttered under my breath, “gosh, it’s too hot today to wear pantyhose,” he went ballistic and insisted they were called nylons or stockings.

Speaking of covering women’s legs with nylons, stockings, or (gasp) the dreaded pantyhose, are you aware that topic in and of itself has hundreds of google searches not only on whether it’s coming back in style to wear (thanks to Kate Middleton) but also whether it’s still a sin to wear them with open-toe shoes.  And folks, brace yourself . . . . but it may NOT be a fashion faux pas any longer.  Now please ignore this entire paragraph but I had to include it because I plan to tag this post with all these words so that the thousands of google searches will actually land on my blog, for once!

Another word that women apparently cannot tolerate is the word, ‘moist.’ You can see the other five cringe-worthy vocabulary words right here, but rest assured that ‘panties’ made it onto this list. Yes indeedy. Clearly the two words strung together in the same sentence could possibly incite a war.

But before anyone thinks they’re gonna be clever in the comments section and tell me to just “put my big girl panties on” and blog about something more significant, I want to defend myself by claiming that words ARE important to me. I often spend twenty minutes just mulling over my choices (eww, mulling? That doesn’t sound too appetizing) in a thesaurus so I can be satisfied that I exhausted all my options for the best and most precise meaning.

And before I enter into a relationship with anyone, I will play word association games with them as a sort of test. Also my favorite oldies song from the 80’s was by Missing Persons, “What Are Words For?” So I feel perfectly justified to “get my panties all in a snit” (Really, snit?? That’s so close to snot! I can’t believe ‘snit’ didn’t make it on the top 6 worst words list!) if someone sings, “You say to-may-toes and I say to-mah-toes, let’s call the whole thing off.”

Call it off? No way! I want to debate about it with you for hours. Let’s call it ‘foreplay.’

Dear Readers — If you’ve ever seen the movie HER, (guy falls in love with his computer operating system) I’ve just written a parody for the fitness company I work for about that time I almost tied the knot with an activity monitor, the little rogue! You can read it HERE and please know that comments left there really help me with my boss – – My Word Slavemaster! Thank you if you can take a moment of your time. 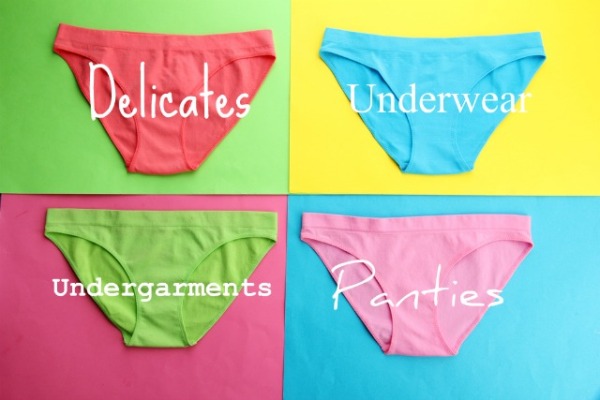 16 thoughts on “Panties . . . Inciting an Uproar? Or Just Uproarious Laughter?”