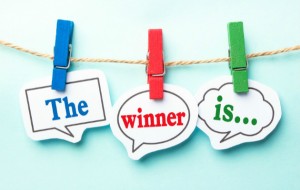 I’ve never entered a writing contest before. Although every time I submit my work to an editor, technically I’m competing against other author “contestants” who want to have their creations appear in the exact same magazine, anthology, or website. And when the prize is an acceptance notice of publication, yes I feel like a winner. That’s a contest if you ask me and so I’ve entered many.

However this writing contest was different. . .

I’ve written novels and screenplays before, but this contest was for live theater and the winners get their words brought to life on a stage in front of an audience. Sign me up!

The other difference was that I only found out about this contest a mere 24 hours prior to the submission deadline, which threw me into some fast and furious typing. And the rules specified it could be a comedy OR a meaningful, serious drama. After some inner debate, I chose to do humor. Big surprise.

But in the end, my biggest dilemma was needing help choosing which play to submit (somehow two distinctly different scripts had been birthed from my infertile, barren brain….fraternal twins?) because I couldn’t decide on my own which was more brilliant. Or (every other hour) which script sucked less. The rules were clear — one entry per person.

Who in my life was competent to give this kind of input and more to the point, would help me make this decision extremely QUICKLY? (Yikes! Like within the next thirty minutes!) The first thing I did was turn to another writer friend (Samantha) who owed me a huge favor since I had recently critiqued her query letter and it helped her land an agent.

Samantha expediently sent me a ton of elaborate feedback on both my scripts. But what wasn’t clear, was her opinion of which one she recommended I should enter into the contest — essentially the only question I had originally asked!

I emailed back and said, “Thank you! But which one was better?” Samantha replied, “That’s personal preference. But I’m on pins and needles waiting to hear what you thought of my feedback?”

So here I am with hours to go until the deadline and I’ve got a narcissistic friend/egomaniac writer expecting me to critique her critique!?

Ugh. Frantically I sent both possibilities to my mother, along with the rules of the contest so she could see the criteria with which they’d be judged. “Ps. Please Hurry!” was how my email ended. After many long hours, she wrote back, “I contemplated this very carefully. I’d go with the one about your multiple personalities falling in love with each other at a cocktail party. But both of them were very meaningful and serious dramas.” I wrote back, “Thanks, mom! But they were both comedies. Which one made you laugh more?”  And then she called me and said, “If you like contests so much, the county fair has a watermelon-eating one you can enter this weekend.”

Okaaay! I’m done with asking females for help. Turning to men has sometimes worked for me in the past. Quickly I sent my scripts to a great guy who performs in local community theatre, pleading “Which one??”  He finally wrote back that both of them had dialogue sections that didn’t sound very good when belted out in his shower. I forgot he only does musical theatre.

Feeling truly desperate, I took my beginning narrator’s lines from each possible entry and sent them as my introductory messages to two different men with dating profiles on Match.com. Whoever wrote me back first and said “That’s really funny!” would be how I would make my decision.

The first bachelor wrote back,  “Hi! Sorry, I’m only 5 ft. 4 and I make it a rule not to do taller women because things won’t line up properly.” Very helpful input. And then the other wrote back, “Meet tonight at 7 pm for a drink? Ps. And are you a therapist? Damn! That was some crazy psycho-babble, babe.”

But now thinking about therapists and my own past sessions… I had the answer to my quandary of which script to submit to the contest. I would send both! One would be entered under my own real name. And then the second script (about my multiple personalities falling in love at a cocktail party) would be sent under the name Sybil. Problem solved!

Readers– Have you entered writing contests? Have you had as much trouble as this? Oh! Also I was recently interviewed. You can check it out just below. But why is it called “Woman on the Edge of Reality?” Lol.

An interview with Stephanie Lewis, author of Lullabies & Alibis

17 thoughts on “I Plead “No Contest!” (When Entering Writing Competitions)”