Well now, who even needs to make an online dating profile when there are Scrabble type games on the internet? Sheesh! At first I thought it was a big coincidence, the number of strange men requesting a round with me. Then I let it go to my head — Ohhh, they were all challenging me because my stats were glowing, and the impressive number of seven letter words I formed! Then it started dawning on me….it’s because my name is Stephanie and not Stephen. Hmmm.

So let’s just say that I’ve experienced “Words With Friends” morphing into “Words With Male Strangers Wanting To Become MORE Than Friends Using Words They Think Are Good Pick-Up Lines.” And they don’t hesitate to put their (lame!) words into the Chat-Box instead of on the playing board.

As an example, here’s what transpired before I could tell any of these men that the jig was up. Just because I’m such a nice person and I don’t like ignoring anyone…

Male WWF Player: I like it. It means you are Open to the possibilities. With us.

I took the bait one more time before I got wise.

Me: Are you really trying to initiate a conversation about capital letters?

Male WWF Player: Oh! Did you want to bypass the alphabet foreplay and just get straight to sexting? I like it. 😉 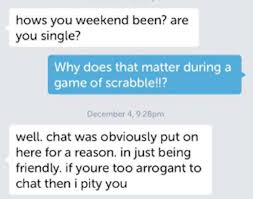 These idiots were lowering my overall scores because I had to keep quitting all the games in the middle with them. A sure fire way to tell that these “players” are not serious WWF players  is to look at how long they’ve been competing, which is noted in their profiles. Typically they’ve all recently joined the game like yesterday. And for some reason, they all think that I was born yesterday!

Other red flags: These scammers are FAR MORE talkative than someone who actually cares about winning the game. And they will always try to get your email address, claiming they have some tips on playing the game better that are too lengthy to share in the chat box. And their profile photo usually has a child in it that they’re piggybacking on their shoulders so you think, “Aw, what a devoted father he is. Probably just plays on here to take a short breather from that active little tyke. I’ll give it a go!”

Enough! I just want to play some Scrabble without having to dust off the real thing from my game shelf and take up room at my kitchen table.

I’m experiencing the same intrusions on Facebook a lot more lately as well. A rash of “Friend Requests” from odd men. They always have two first names. Antonio Marcus or Clyde Thomas or Justin Scott. And they are ALL (supposedly) in the military and they always have an American flag as background for their profile photos. And they are all listed as widowers. Why do they think being a widower would be such an attractive thing to advertise, I wonder? Perhaps they feel it will garner sympathy. “Ahh, the poor man lost his beloved spouse. I should bring him a brisket dinner.” Is that what they think goes through a potential victim’s head? When I’m actually thinking, “Ew! I wonder if he stabbed, poisoned, or strangled his wife!?”

Readers: Are you finding a lot more scam artists in online places where you’d least expect to encounter them? Also I am writing less here on WordPress and more on The Medium. (I cannot resist that readers can “clap” for you over there. What can I say? I like applause!) If you’d like to peruse my more serious writing about relationships on The Medium, I’ve been getting published on PS I LOVE YOU. Just click   HERE 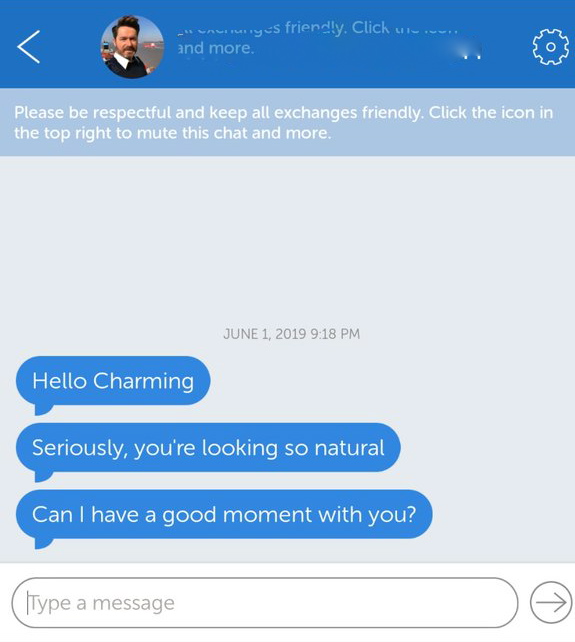